This quad set is manufactured in high quality materials. Honey Comb core adds lightness and stability whilst the resin construction provides strength and durability. The thickness at the base allows to increase the speed without losing control as well as keeping a great performance allround. With a moderate flex is just a great set of fins for those seeking for swift direction changes. Best performance achieved in sand / reef surf.

Featherfins is an initiative from a group of crazy surfers who decided to create our own brand of fins to offer what was not on the market:  High quality fins at an affordable price for everyone. A product made by surfers, tested on the beach, designed and taken care of by us to the last detail so that the final result is a high performance fins, ultralight, with an attractive design and that reaches you in recycled cardboard. At Feathers Fins we are dedicated to the design, production, distribution to shops, workshops and the online sale of high-end fins. 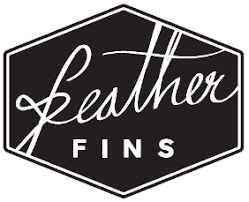